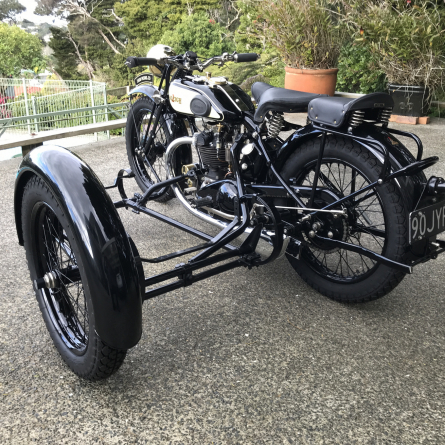 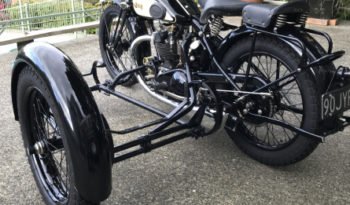 An opportunity to own a prize winning and rare 1928 Raleigh 23 Sports Tourist Trophy. Acquired by the current owner in 1982 - the restoration (including the sidecar chassis) was completed in 2017. An extremely high standard of restoration has taken place with originality in mind at all times. External services used throughout the restoration (such as tank paintwork) have been undertaken by highly skilled professionals. Starts easy and runs very well as you would expect from a time-taken concours restoration to this standard.

Once Britain's best-known and longest-lived bicycle maker, Raleigh also manufactured motorcycles from circa 1902 to 1905, and again from 1919 to 1933. During that period, Raleigh were praised for their superior build quality and near â€˜bomb proofâ€™ reliability. In 1925 the first OHV Raleigh was released. The Raleigh engineers had designed an overhead valve top end for their outside flywheel 2 Â¾ engine. The 'Motor Cycleâ€ magazine tested such a model in march 1925 and found it handled well, went well (62 mph) and was free from unpleasant vibration. This success prompted the factory to market an OHV machine in the 500 cc class, with bore and stroke dimensions of 79Ã—101 mm. The Model 23 is capable of carrying a sidecar which the owner also has available as a separate sale (or included with bike upon price agreement). For contact details I am located in the UK - and the bike is located in Auckland, New Zealand. Shipping Worldwide is a straight-forward process..