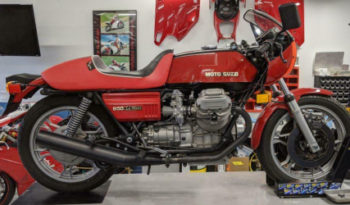 You are looking at one of my favorite bikes in my collection. Itâ€™s a unmolested 1976 Moto Guzzi 850 Lemans with a lot of patina and less than 2000 original miles. Many find the miles hard to believe however, I purchased the bike from Atlas Cycles in Tulsa Oklahoma in 2007 with roughly 1000 miles on it, this is documented on the title I received from them. I was told Atlas sold it new in 1976 to a customer who then traded it back in six months later claiming it was too much motorcycle for him. The owner of Atlas really liked the bike so put it in storage at the dealership. He was selling the dealership in 2007, needed to get rid of his collection, hence I was able to acquire it. It needed a good cleaning, some rubber parts replaced, new tires, carbs cleaned, and fluids changed. Since then sheâ€™s been in my collection, started once a year, ridden occasionally hence the 2000 miles. I just had her serviced, new battery, carbs cleaned, and fluids changed so sheâ€™s ready to go. As the tires are thirteen years old, I would put a new set on if you plan to ride the bike. Other than this all that is needed is a good cleaning/detailing as I left it as is. Yes the frame is a dull black color of seemingly low paint quality. If you research 850 Lemans' this was the way they came from the factory when new, it's a little odd as one would think they would dress up their flagship sport bike offering during this time but they did not. As the original seat is very fragile and hard to come by, I wrapped it in plastic placing it in storage when purchased and bought a Corbin, it comes with both. The other problematic items on these bikes was the switch gear, very fragile, susceptible to water all work as intended on this one. Whenever washing this bike I placed plastic wrap of the switches and velocity stacks. No the bike does not come with air filters as they did not from the factory, only the OEM velocity stacks. The bike is a blast to ride, smooth, lots of low end grunt, great brakes, so long as you use the rear in conjunction with the front as they are linked and entertaining. Itâ€™s pretty amazing for a forty four year old bike.

Iâ€™m a sixty year old collector that takes very good care of my flock. The only reason sheâ€™s for sale is Iâ€™m no longer road riding or going bike shows as Iâ€™ve been bitten by the track bug. No, this bike has never seen the track..