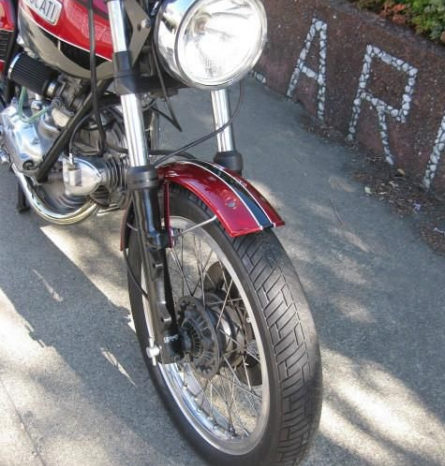 I've always wanted one of these, (I am a confirmed and unrepentant right side shift guy) and finally got one.I've had the motorcycle about two years and found it had a few problems, mostly smoking from the front cylinder and I didn't eel like carrying around extra spark plugs as a guaranteed necessity, although it's always good to have them as a back up.

The bike has a new very professional 'stock' burgundy and black paint job, new metal tank badges and new side cover badges. The striping is all done by hand and is the correct off white toward ivory, per original. All the dimensions for paint locations are as per a noted expert, bevel barbarian and well known belt buckle maker. I was told the only problem with the paint was it looked better than the factory paint ever did. It also wonÃ¢â‚¬â„¢t fade and craze like the original paint Ducati used. They used to start fading as soon as you parked them in the sun! The high water price I've seen on these was about 8 months ago when someone paid around $34,000 for an 'original' bike that still had the stock air cleaners. That's something pretty much anyone who knew anything about motorcycles, took off. This motorcycle has ll the upgrades you want on a rider, better alternator, regulator and fuse block, better suspension and better ignition system. If you are looking for a really good one of these, here it is. Make an offer and let's talk. It is a 1974 3rd production series version, titled as a 1975 and has 23,197 miles on it. All the top end work was done by Hanson Racing Technology in Chico California. Craig said the bottom end felt perfect..