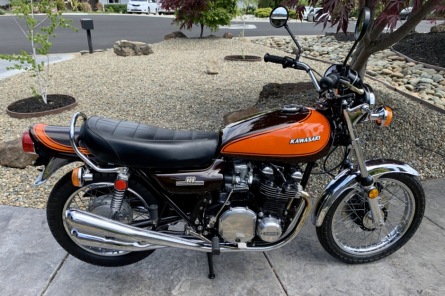 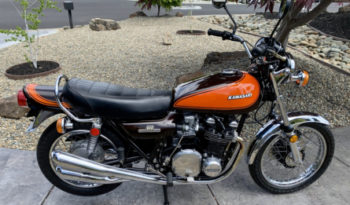 This 1973 Kawasaki Z1-900 was originally purchased in Japan by a returning Vietnam veteran in October 1972, who reportedly stored it in a garage from 1979 until his passing in late 2018. There and then, I acquired it from the ownerâ€™s family in 2019, and a subsequent refurbishment using new old stock parts included refinishing the bodywork in brown and orange as well as rebuilds of the gauges, front brake system, carburetors, and more. Power is from a 903cc inline-four that was overhauled with new piston rings, seals, and finishes and is mated to a five-speed transmission. A new chain, rear sprocket, and tires were also fitted. Factory equipment includes a cylinder head with stock carburetor synchronization ports, an unstamped exhaust system, and ribless Mikuni carburetors.

This bike comes from the first year of Z1 production and is said to be one of the first 1,200 examples that used unique components compared to later 1973 models. The fuel tank, side covers, and tailpiece were refinished in candy brown and orange sourced from Paintworkz in Lake Havasu, Arizona and applied by Ryan Smith in California. Brightwork including the fenders, headlight ears, turn signal housings, and passenger grab bar. The bike retains a stock two-up seat, lighting, and reflectors in addition to a fuel petcock with aluminum outlets and both center and side stands. Chrome wire-spoke wheels measure 19â€³ front and 18â€³ rear and wear new replica Dunlop Z1 Gold Seal tires. Suspension consists of a conventional front end with polished lowers and an unstamped rear swingarm featuring a brass grease fitting and mounted with dual chrome shocks. The front disc brake system was refurbished by Z1 specialist Achim Huber in Berlin, Germany in August 2019, while the rear drum features an unstamped stay arm. Instrumentation includes a 160-mph speedometer, a tachometer with a 9k-rpm redline, center-mounted indicator lights, and a five-digit odometer showing 20k miles. The gauges and instrument cluster were refurbished by Achim Huber in June 2019. The bike retains a #755 key that functions in the ignition switch, steering lock, and seat lock. The 903cc DOHC inline-four produced 81 horsepower when new and retains its factory cylinder head with carburetor synchronization vacuum ports as well as an unstamped four-into-four exhaust system. Work performed in September 2019 at Atlanta Motor Works included cylinder honing, painting and polishing, and reassembly with new piston rings, seals, and gaskets. Additional service in February 2019 included refurbishment of the Mikuni VM28C ribless carburetors by â€œWired Georgeâ€ Lesho at WG Carbs in Mico, Texas. Power is sent to the rear wheel through a five-speed transmission and a new old-stock chain and rear sprocket that were installed in 2019. Included in the sale is the stock tool kit, an ownerâ€™s manual, a factory service manual..