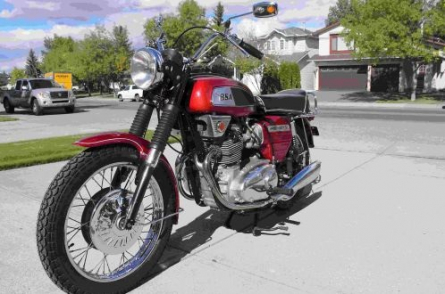 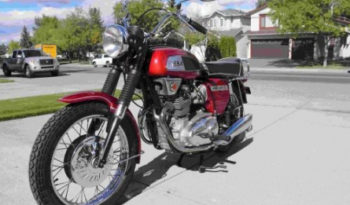 They say 'It's only original once' and this magnificent BSA triple is as close to 100% original as a 47 year old, perfectly running, iconic piece of motorcycling history can be. The only non-consumable parts (other than tires, tubes, spark plugs, breaker points, battery, cables, oil and air filters) that did not leave the assembly line on this motorcycle in April 1969 are the mirrors, the fork gators (originals finally separated into individual rings about six years ago) and the battery hold-down strap (suffered the same fate as the fork gators last year, buckle and retaining clips are original). The driver foot peg rubbers, the shift lever rubber, the center stand rubber and (I think) the kick start rubber was also renewed over the years since the originals had worn or were hardened by time.

Only BSA NOS, British-made equivalent items or genuine original factory supplier parts were ever used as replacements. The original Royal Carmine red paint with hand-laid ivory pinstripes is in remarkable condition, but the luster is thinning in some areas (tank top panels) and showing some fading (tank right side and rear fender to the right of the taillight) in others. The mileage is original and the distance shown on the trip meter came from a glorious trip to Nanton Bomber Command this July when the pictures of the Rocket 3 alongside the Lancaster were taken. There are no dents or scrapes on the fuel tank and the chrome remains beautiful. The BSA stencil has faded on the back of the saddle, but the leather (yes, leather), is supple, the white piping and the supportive seat foam are like new. Please note the following: Included in the sale of this stunning 1969 BSA Rocket 3 motorcycle are the following additional collector items: the original BSA factory tool kit. the original BSA Ownerâ€™s Handbook which was water/acid-damaged from being carried behind the side panel until 1971. a genuine replacement BSA Ownerâ€™s Handbook purchased from the dealer in 1971 to replace the damaged original. a genuine BSA Rocket 3 Work Shop Manual originally purchased with the motorcycle. a genuine BSA Rocket 3 Spare Parts List (January 1969) originally purchased with the motorcycle. two sets of original ignition and steering lock keys. a brand new replacement battery (supplied dry, with electrolyte included separately) an original 1969 BSA Rocket 3 brochure in pristine condition. a two page BSA Rocket 3 advertisement from a late 1969 issue of Playboy magazine. an ultra-cool, dealer-supplied Rocket 3 touring windshield fairing, one of the very first manufactured by 'Slipstreamer' in St. Paul, MN, USA, complete with all mounting hardware (all in nearly-new condition). one pair of chrome, long-reach rear view mirrors for touring with the windshield fairing. one chrome touring/crash bar manufactured by Britax in London, England. a published reprint of Cycle Magazineâ€™s first test of the BSA Rocket 3 in October 1968. The bike carries no liens or encumbrances and comes with a clear title in my name, plus a legal Bill of Sale..