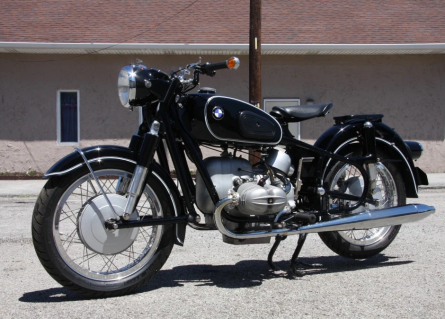 This 1965 BMW R69S is equipped with a Denfeld solo saddle and an accessory 3-gauge headlight nacelle. It underwent a restoration at Bench Mark Works in Sturgis, Mississippi in 2010 and has resided in the sellerâ€™s private collection for past seven years. Power comes from the numbers-matching 594cc boxer-twin, which is paired with a 4-speed gearbox. Approximately 50 kilometers have been added since the work was completed, and the bike is now being offered with a clear Oregon title. Factory equipment for the R69S includes an Earles fork, friction damper, and frame lugs for mounting a sidecar. A few imperfections are present in the black finish, most notably on the hinged rear fender, tail lamp, and around the ignition switch. Polished aluminum rims are laced to front and rear 200mm drum brakes. A set of Avon tires are currently mounted.Originally designed and sold by Rauch, an aftermarket German accessory company, the modified headlight bucket features provisions for a tachometer, as well as a single 2 1/16â€³ gauge and the factory speedometer. 3,151 kilometers (1,958 miles) are currently shown on the odometer.The air-cooled 594cc flat-twin was rated by the factory at 42 hp in â€œSâ€ trim and received a rebuild, including new oil slingers during the 2010 restoration. It is paired to a 4-speed manual gearbox and sends power to rear wheel through a dry clutch, driveshaft, and a bevel rear. The chassis plate can be seen above, indicating the original engine to be #660332. The matching stamping is located on the engine case above the right-side cylinder as shown in the gallery below, confirming originality..